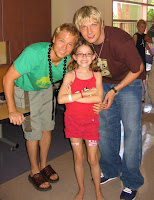 I have a hard time believing that it was only four years ago that our world changed so dramatically.
August 23, 2005...a date that lives in infamy in my brain. I'm too fried at the moment to write a coherent post, so I'm revising a message I posted last year to our local support group.


Miss M and two Backstreet Boys at Phoenix Children's Hospital, Aug. 2005
(notice the bandaids? she collected one for every finger poke and shot back then)


Four years ago, my husband, daughter and I were sitting in the pediatrician's office waiting to find out why Miss M was losing weight and peeing all the time. I knew in my heart what it was, even though my head and my husband were telling me that everything would be fine and it was something simple.


After a simple urine dip, we knew she had diabetes. The nurse practitioner came back and said that they were waiting on a call-back from the hospital on whether or not we could drive her there ourselves, or if she needed to be taken in an ambulance. I was so confused - there wasn't anything WRONG with her, why would she need an ambulance? After the PNP left, M started to cry, and it took all I could NOT to cry. She was scared - she knew something was wrong, and wanted to know if it was going to hurt, whatever they were going to do. She didn't want to go to the hospital. Because my college friend Jenny's son had been diagnosed a few years before, I knew that we were looking at three days or more at the hospital.


I excused myself, went outside the building, and called my in-laws to see if they could come to Phoenix to stay with Mister Boychild while we took her to the hospital. Honestly, I just needed to get out of the exam room; I felt as if all the oxygen had been sucked out and I couldn't get my breath. I needed to go outside and have a minor breakdown and then pull it all back together. I remember the absolute SILENCE on the end of the phone when I said those words I had been dreading - M has been just been diagnosed with diabetes. My father-in-law has been dealing with type 2 for years, and at that moment, I didn't really know what we were going to face with her, except that it was going to need insulin. I don't think my mother-in-law knew what to say, either.


It turned out that there were no beds available, so they sent us home to wait for a call from the doctor on call to come down later that night. We packed her a bag, called family to tell them what was happening, and decided that it would be better to keep our son with us and on his normal school schedule. He had just started first grade, and Miss M third. The fabulous and wonderful Dr. D. called to tell us to come down - our first conversation - and I asked what she could eat, because the poor girl was "soooooooooo hungry", another one of the symptoms that I had ignored or explained away to myself. She told us to have some milk, a cheese stick, or some peanut butter crackers, foods which we would come to be very familiar with for snacking in the days and weeks ahead. By 6 PM, we were installed in a room at the children's hospital, telling the story AGAIN of what had brought us to the doctor that day. Miss M had her first finger poke before dinner (somewhere in the mid-400's.....I have no real recollection of the number, because it all is a blur) and her first shot of insulin after dinner.

I wound up snuggling up to my little girl in her hospital bed, trying not to jostle the IV in her hand that had been so painfully inserted at midnight. (We had not yet heard of EMLA) It took 3 hospital staffers AND me to hold her down to get the IV placed, in that "cheerfully painted' room with jungle animals on the walls and glow-in-the-dark stars on the ceiling. She was slightly dehydrated and had large ketones, so getting fluids into (and out of) her was a major goal.

1 AM brought another finger poke with one of those prehistoric one-use lancets; she left many bloody spots on the hospital sheets that night. I could hear the night nurse calling the endo on call, asking if Miss M should have another shot of insulin since her BG was 300+, even though it hadn't been ordered. I had yet to learn what the "right" range was, but 300 was obviously NOT where it needed to be.


The next three days were a blur of information-packed days and sleepless nights. Crying in the shower in the parents' bathroom down the hall (recommended by the kind and supportive resident, Dr. G). The Dear Husband would take Mr. Boychild to school, come to the hospital for training, go back and pick up MB, then bring him back to the hospital so we could have all dinner together. Miss M loved getting to call "room service" for her meals, or for a snack whenever she wished - the rest of us made do with cafeteria fare.She thought the hospital was a great place, full of toys and games and people bringing her presents.....she wasn't "sick", she was having a new adventure.

Bringing her home after 3 full days and nights in the hospital was scarier than the day we brought her home the first time. I didn't understand how they could be sending us out into the world to deal with this disease when we had NO idea what we were doing. Now I know that we had it SOOOO much easier than those who had babies diagnosed, but at that time I just kept going back and forth between wondering why she couldn't have just broken her arm and being thankful she didn't have cancer. Cancer seemed so much scarier.....

Fast forward to 2009. The Dear Husband and I are now full-fledged members of the Amateur Endocrinologist's Club, doing our best to be a functional pancreas for our daughter. We are living our "new normal". Miss M is a happy, healthy pre-teen. She's half again as tall as she was at diagnosis, and weighs more than twice what she did 4 years ago. She's on a new pump (the OmniPod is her second insulin pump) , we have a continuous glucose monitor that I dearly love and she hates, a group of wonderful friends who understand completely what this journey has been like and continues to be, and many more friends who, while they don't LIVE this journey, support us in every way possible. So I say today to you all, "THANK YOU". Thanks for being there when I needed to vent; thanks for listening when I cry; thanks for being there when I have questions; thanks for just being there. Thank you to each and every one of you who comes to our fundraisers, walks around at Tempe Town Lake with us no matter how warm it is, wears our team t-shirts, and lets me ramble on about diabetes even if it makes no sense to you whatsoever. Being alone with this is just not something that I could bear; I need and am grateful for the support, friendship and love of family members, friends (both old and new, both local and "virtual").

If you've read this far, wow. You have stamina. :) If you're still reading, please visit watch this video on the Artificial Pancreas Project - the next step to a more normal life for those with Type 1 diabetes. It's not a cure by any means, but it's a giant step forward in normalizing blood sugars and avoiding complications. Those of you who are local, please join with us and 20,000 of our closest friends and relatives at this year's JDRF Walk to Cure Diabetes at Tempe Town Lake on October 31. It's my sincere hope that I won't have to keep writing this same type of post year after year after year......I want to be able to write a post that says "She's CURED".