Growing up, I was never one of those kids who was a math whiz. Sure, I got by in math class, but numbers were not my friends - I found my comfort in words, in books, in language. I could make sense of the most complex sentences, but throw the Pythagorean theorem at me, and I was lost.

High school algebra was the first time I ever got a failure notice in school...Pulled out a B, I think, but I choked my way through whatever math classes were required, and I certainly didn't sign up for any that were not necessary to get me through. When I went to college, I avoided certain career paths that were going to put me in multiple higher-level math classes, because math is NOT MY LANGUAGE. Maybe I'm just not an ordered, logical thinker (Me? Really?) but when it comes to numbers, they may as well be some exotic foreign language. Or, they might be English, but as spoken by the Swedish Chef.

So, isn't it ironic that my life nowadays REVOLVES around numbers? 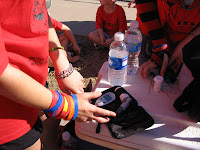 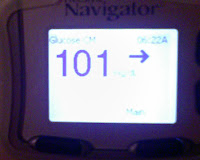 Diabetes is an insidious, cruel, time-consuming and heart-wrenching disease....and it's ALL ABOUT THE NUMBERS.

PS...is it any wonder I find numbers confusing? This is what the temperature readout said in my car yesterday, less than 2 minutes apart...